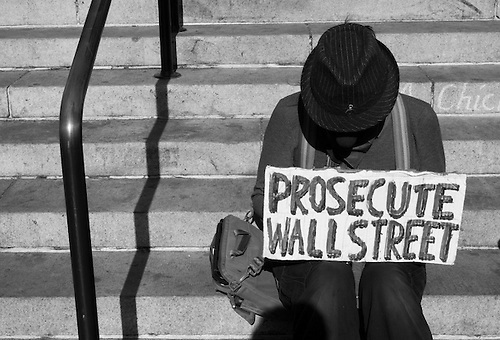 Anger at Wall Street and the bank bail out

Camp Occupy LA, as I’ve come to think of it, has taken on the look and feel of a community. Neighborhoods seem to have sprouted up with clearly defined lines that all but say “keep out” if you aren’t invited. There seems to be a clear desire on the organizers part to create a welcoming atmosphere with constant social media reminders of teach-ins, speakers, actions and workshops for everyone to participate, yet the daily vibe is more reflective of a old neighborhood where newcomers are initially viewed with suspicion. With one simple camera and a small, satchel bag slung over my shoulder, I strolled through the tent city on Monday, admiring the street art and looking for images that define the daily life of the camp. 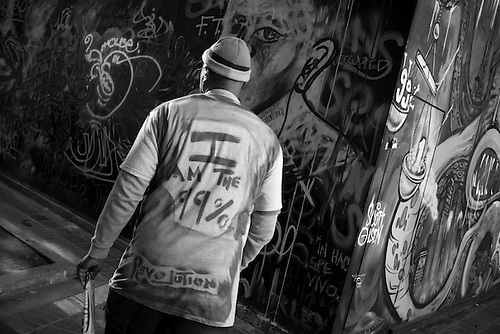 Getting the message out for the 99%

Within a few minutes a tall man approached and asked, “Where are you from?” Having heard this at least 10,000 times in my career, I knew what he meant (what media outlet was I working for?), but I simply don’t like the question. I rank it right up there with “What do you drive?” or “Where do you live?” It’s an age-old way to judge someone without warrant. 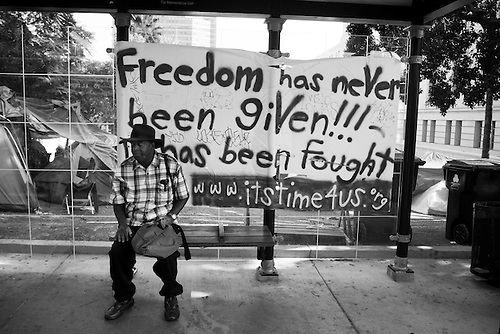 An Occupy LA banner at a bus stop speaks volumes.

I replied in a friendly, naive tone, “I’m from Los Angeles, where are you from?” He looked at me hard, smiled after a minute, and then refined the question.

“Then what do you do?” my bearded friend asked.

“I take photos that reflect what’s going on.”

“Oh,” he said with a hint of disbelief.

Turns out that Mike was a good guy and I think I gave him the same impression. We chatted for a bit before I wandered off in search of images and he slipped back into the mass of tents and tarps, two strangers in the same neighborhood. 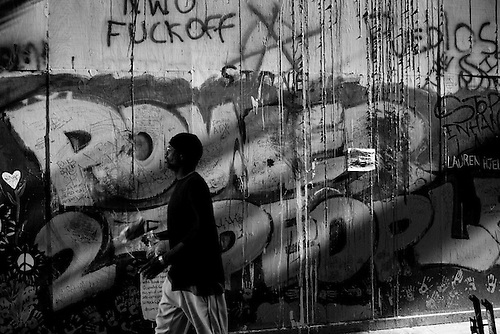 For more images of Occupy LA, click here and search for Occupy