Give Up the Tents & Evolve

Looks like a pivotal time for the Occupy movement, though the direction it takes now will reveal the heartbeat of the beast. I’ve been advocating that too much emphasis is attached to the physical presence of an Occupy encampment, so perhaps it’s time now to evolve Occupy into a intellectual force that piques the interest of individual voters, entire communities, influential non-profits, foundations and other grass root organizations. 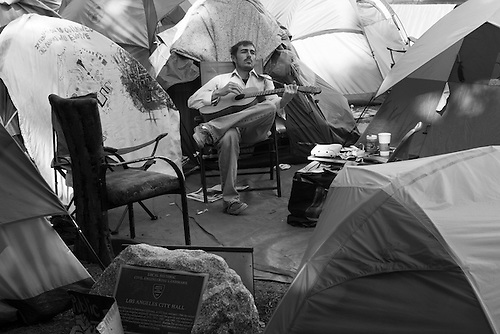 Passing the time of day at Occupy LA

Organizers could learn a lot from one of the most destructive forces in nature; water. Water is able to disrupt and alter landscapes and has done so since before man. Yet, in my opinion, the Occupy movement is acting more like a rock in its desire to hold on to the physical encampment. Water flows and takes on new forms to achieve its continuity. It adapts to whatever container. If it meets a barrier, it seeks a way around and it’s ultimately successful. Occupiers need this fluidity to evolve. Don’t resist the change. Embrace it as a catalyst to the next level of occupation. Smile and remind everyone that the city can take your tents but they can never take your intellect, ideas or dedication.

There are few who believe the occupiers’ anger and frustration with financial inequality will dissipate. I certainly don’t. However, it will be interesting to see how many of the physical occupiers who claim allegiance to the cause, yet spend hours playing guitar, smoking and generally relaxing in the free food environment, will step-up with the evolution and offer their resistance in ways that will demand more than occupying a tent.

Case in point is the fact that the most influential and meaningful action to date revolving around financial angst was the Bank Transfer Day. That was the type of civil disobedience that had a real impact and it had nothing to do with physical occupation of a park. Major banks like Chase and Bank of America both backed away from ridiculous new fees on consumers as a result of the action. Most reports indicated that hundreds of thousands of people moved their money from commercial banks to community banks and credit unions.

Tent occupiers can’t take credit for the Bank Transfer Day idea, but they certainly can learn from it. The idea came from a young lady clearly fed-up with bank fees who told her friends on Facebook that they should all move their money. It went viral from there with the help of social media, which the occupiers have clearly embraced with success. Use all the tools available, but most importantly embrace the change as a natural flow to the next step toward the goal. Giving up the tents, after all, doesn’t mean giving up the cause.