Survival of the Strongest?

Is it time for the Occupy people to work with local government or fight? As some violence has occurred, primarily in Oakland where occupiers were met by police in a confrontation that quickly escalated, the majority of Occupy movements have gone on peacefully. A dialog with city officials and LAPD has obviously kept the Occupy LA movement free (so far) of violence and mass arrests. But the fact remains, as some homeless 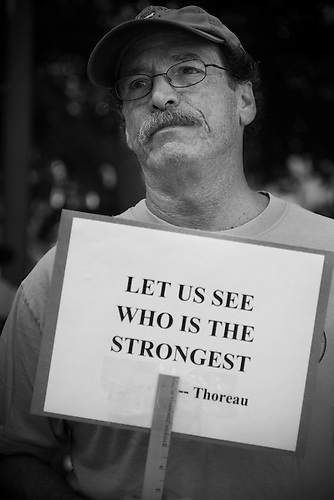 advocates are now vocalizing, that camping in a city park or at City Hall is against the law and the homeless have been run out of parks after dark for years. Why should the Occupiers be treated differently than the homeless are treated?

The answer is drawing close. For the most part, there has been a willingness by city officials around the nation, including LA Mayor Antonia Villaragoisa, to allow this movement to take root. But, an increasing number of city politicians, including LA’s mayor, are now exploring ways to extricate the movement from City Halls and parks in a way that doesn’t involve police raids.

The willingness for both sides to come to an mutual agreement as to the future of the tent city (that’s what is at stake, not the right to protest) will determine if a Oakland type scenario will envelop LA and other occupy locations. The real question is if the tents are a necessary component in the movement. Can the desire to effect change for the “99%” succeed by, say, occupying a park from sunrise til sunset, each and every day? Or by maintaining a picket line 7 days per week in front of the financial institutions the movement holds accountable? Or by funding political candidates to fight for economic equality?

It’s worth remembering that rigidity is not always the answer and that sometimes the strongest are the most flexible. A ridged Oak tree will succumb to heavy pressure from wind and easily break in two. A flexible piece of bamboo is also strong, but responds to pressure by bending and bouncing back to remain in one piece. 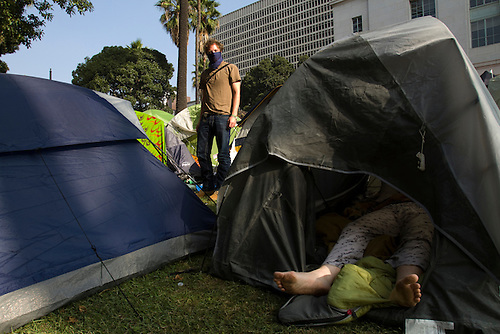 Is it about the tents? ©Todd Bigelow

Update: Steve Lopez, a great columnist for the LA Times, wrote his perspective HERE. It’s worth noting that Steve has devoted his talents to writing about government waste, bureaucracy, failure to pay for teachers/libraries and the arts, as well has having written about and personally helped the homeless. In other words, he has walked the walk and the Occupy movement should pay close attention to what he’s saying, which is give up the tents and get to work for the cause.