The Business of Photography Workshop was named by Photoshelter in 2014, 2015 & 2016 in their annual survey of inspiring workshops!

Shoot the Obvious Too

Not a day goes by without the economy dominating the news and infiltrating our lives. Banks scheme for new ways to screw the taxpayer who bailed them out of certain demise while the Obama administration pushes its jobs initiative with a full frontal assault. The GOP, who, lest we forget, was at the ship’s helm when the economy sank faster than the Titanic, has decided it’s better to win the political debate by blocking any Obama initiative than to actually help the economy. In the meantime, the housing industry, which led the economy into the abyss six years ago, sits like a two ton anvil on the chest of economic growth.

So what’s a photographer to do?

Well, there’s more than one way to approach it. There has been some fantastic documentary work that put a real, human face on the foreclosure crisis. One of the best was shot by one of the best, Anthony Suau, and published in Time. There have been others as well, but Tony’s hit the mark. You should check it out by clicking the link below. 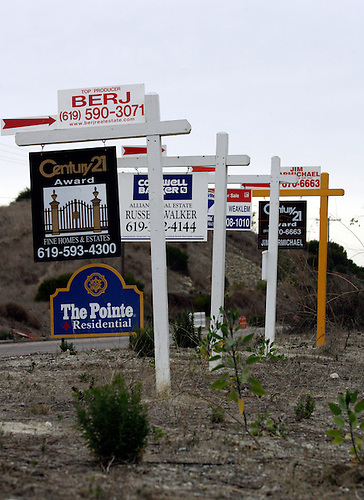 Photographers can learn more from this endless economic story. Don’t overlook the simple things to shoot that effectively illustrate the story. We should record the images that we see everyday that aren’t terribly dramatic but are terribly illustrative. Case in point is the image to the right.

I drove by this image in 2006 more times than I honestly remember. The signs were outside my brother’s San Diego gated community where I often visited. Then one day it occurred to me to just grab my camera, walk down the hill from my brother’s home, snap a few images, walk back up the hill, run them through Lightroom and export them to my website and my agency’s site.

Is the image aesthetically appealing? No, not at all.

Is the image anywhere on par with Tony Suau’s work? Not even close. In fact, it’s embarrassing to put this image in the same blog post.

But to discount the aesthetic appeal and view the image from the purely illustrative perspective, the photo showing a row of For Sale signs is excellent. Stated simply, it’s a no-brainer image that easily identifies with the economic story and that’s often what a magazine or company wants to license.

Which is why the photo has sold many times over the years.

As photojournalists, we’re somewhat predisposed to getting deep into a story. That is truly what it is all about. But when clearly illustrative images are just outside our front doors, it makes sense to record those as well. Especially when photojournalists are always looking for ways to fund projects, why not use these simple, inexpensive images to generate a little cash flow?

Other images that have sold multiple time that took little or no effort include my son at an airshow, my son in front of our house with his skateboard and my son in Bubble Gum Alley ( it’s gross).

Make no mistake about my point here. We should all strive to do the type of work exhibited by Anthony Suau (which, incidentally, won him World Press’ Photo of the Year for 2008), just don’t ignore the simple, effective images right outside your door.