I’m humbled that for the second time in my career a museum has included my images in a permanent gallery. The Oakland Museum of California, an innovative museum that houses the largest and most comprehensive collection from famed documentary photographer Dorothea Lange, is set to officially open their renovated California History 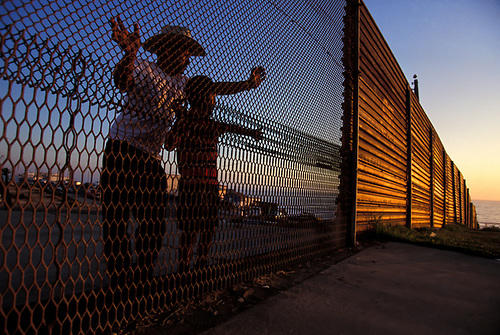 A father and son peer into the U.S. from Tijuana, Mexico. ©Todd Bigelow

gallery after over a year of curating and preparing the exhibit. “California…To Be Continued” is dedicated to telling the story of from 1975 to the present of people coming to California. Many new sections of the gallery will open on Friday, October 21, but the prominent feature of the gallery deals with the US/Mexico border.

The official press release reads “Along a ‘border fence,’ visitors can explore the border between Mexico and the U.S. today, the people who cross it, the economic lines between the two countries, and the people who

watch and patrol the border. Elements include some of the things immigrants have dropped as they cross the border illegally, such as shoes and water jugs; scopes used by the Minutemen to patrol the border; materials manufactured in maquiladoras; and a water station left by the Border Angels for immigrants crossing in the desert.”

I’m pleased to have these two images included in the gallery and look forward to the reception. The image above showing a father and son is also included in the permanent collection at the California Museum of Photography. I’ve spent many years photographing along the border, including time spent with Minutemen and with Border Angels, and feel strongly that the museum has adequately portrayed the history of the controversial and intriguing region. Pay a visit if you’re in the Bay area.