Looking Back: The Aurora News Blog on 9/11 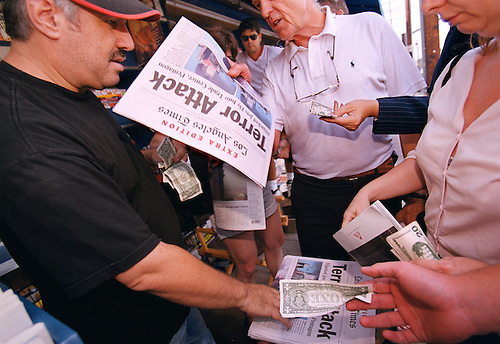 Below is what I wrote for the Aurora Photos News Blog.

The phone rang, jarring my wife and I from our sleep. Dawn was just creeping under our bedroom shade, but the feeling of dread had already enveloped the room before I grabbed the handset. I had no idea why the phone was ringing, but I did know that the likelihood of the other person bearing good news was nearly nonexistent.

“Turn on the TV” my brother in Rhode Island hollered into the phone. “Quick!”

I hung up and scrambled across the house to turn on the television without waking our five-year-old son. The phone began to ring again. I managed to catch a glimpse of Tower One on fire while grabbing the handset fully expecting to hear my brother’s frantic voice again. But this time it was Martha Bardach, TIME magazine’s West Coast Photo Editor, asking that I get to downtown Los Angeles as soon as possible. No one knew where other attacks might occur, she said, but one rumor had it that a plane was heading for Los Angeles.

I made it to LA and began photographing as people assembled on the streets, talking on their cell phones, looking skyward with a sense of disbelief. The plane, thankfully, never materialized and people started to make their way home only hours after arriving for work. By this time it was being reported that the U.S. had been attacked by terrorists, yet LA had not directly been hit. I ventured across the city to the Federal Building near UCLA and found that the FBI were guarding the facility with assault rifles while listening intently to earpieces. At a nearby newsstand, a growing number of people were gathering. I stopped and began photographing as Angelenos (or were we all Americans at that point, I remember wondering), desperate for news and information, scrambled for position and thrust their money at the clerk in attempts to claim a copy of the LA Time’s extra edition published only hours after the terrorist attacks. “TERROR ATTACK” screamed the headline.

Hours later, I was sent by TIME to document citizens lining up at a Red Cross facility to donate blood for the victims and then onto a large, non denominational prayer service where tears flowed, heads bowed and prayers went out to victims and their families.

I then drove home to my wife and son who were safe and healthy. I cried along with my wife that night, knowing that the world had changed fifteen hours earlier when I reached for the phone.